Does God Have Everything Under Control? 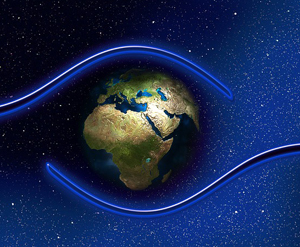 The short answer to this question is: It depends on where you’re talking about.

In the past several posts we’ve been discussing the way God created women and men. We’ve noted that people are created just a little bit lower than God, and that we have been given an important leadership role in the Creation, over things seen and unseen.  We read in Ps 8:6 that God has given us authority over the works of his hands, and that he placed all things under our feet. Psalm 115:16 puts it another way: “The heavens are the Lord’s heavens, but the earth he has given to the children of man.”

These verses seem to suggest that heaven is the realm where God exercises unchallenged control, but that the earth is under the authority of women and men.  This is to say, that God has released control of this place to us. He’s the builder and the owner. We’re just renters, but we can do with this house whatever we want.

I tend to think of this arrangement a both exciting and sobering. The fact that he gave us an unfathomable amount of authority and responsibility speaks to what amazing people he created us to be.  On the other hand—it's sad to recognize how poorly we as the human race have exercised our leadership role.  We’ve made horrible choices that have hurt ourselves and others, wreaked destruction on the physical world and  - most importantly – broken the heart of God. The preponderance of misery, violence and suffering in the world bears witness to our failure.

But there is hope.  When Jesus taught his followers to pray, he instructed them to say, “on earth as it is in heaven.”  What this means is that we have the opportunity to submit our control over this world to God’s will and God’s ways. We can recognize our failure to exercise righteous leadership, and ask God to help us make the choices that will honor him and rescue this creation from its spiral toward futility.  We can ask God to change hearts and minds, so that people will want to do the things that please him.

All of this happens through prayer.  God is ready and willing to help us, but he awaits our invitation.  He won’t just rip  authority away from us. But he will intervene powerfully in this world if we ask him to.

So does God have everything under his control?  In heaven, Yes.  On earth, I would say Not yet.  But as we ask him in prayer to establish his kingdom and bring about the doing of his will, we can be confident that little by little this world will become more like heaven, and that some day his righteous lordship will be the same down here as it is up there.