What does it mean to say "God is Sovereign"? 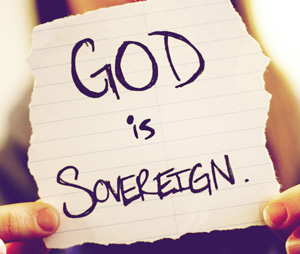 My wife Kimberly has downloaded a daily women’s Bible study application that has re-kindled her fascination with the Scriptures.  But as is often the case when something seems “too good to be true”, she has discovered that there is a theological bias in the commentaries that runs contrary to the way that we have understood the Bible’s teaching on the nature of God.  As the study goes through the book of Esther, the commentator emphasizes that “no part of Esther’s story is luck or chance.”  Pointing to all of the details that came together to bring about the deliverance of the Jewish people – she cites the book of Esther as a clear example of God’s intervention in human affairs.  Using language that highlights God’s ability to shape events, she notes that “God permits . . . God allows . . . God sets . . . God positions . . .”  And on all of these points I agree.  I have no trouble with the idea that at certain moments in history, God “takes the wheel” and works to ensure that events unfold exactly as he desires.

Where I take issue with this particular Bible commentator is that she rather carelessly moves from micro intervention to macro control. That is to say, she interprets the story of Esther as saying that God not only coordinated events in Esther’s life, but that He controls all things throughout all history in everyone’s life. She writes, “God is and always has been at work, orchestrating all of history to work together to accomplish His purposes. This is what it means for God to be sovereign.”

The implications of this statement are enormous, and if it is true, we would have to abandon the idea that the Bible can be read and interpreted at face value.  What we have to understand is that Esther and the Jewish people ended up in Babylon as a consequence of Israel’s heart-breaking rebellion against God over many generations.  God never wanted the Jewish people to be taken captive, and over many generations he sent his prophets to warn the Jewish people that they should turn from their sin and return to God.  Ezekiel 22:30-31 is a particularly poignant passage where God describes His punishment of Israel as something that he never wanted to do, and desperately sought to avert. But the hearts of the people were too hardened.  Thus, to say that Israel’s rebellion (or any sin) was somehow part of “God’s plan” undermines everything that the Bible says about his righteous character and his hatred of sin.

“Sovereignty” is a term that is often used and abused. Its meaning in Scriptures has nothing to do with the idea of absolute and total control. In the NRSV, “sovereign” is the English word used to translate the Hebrew title  adon (Ps 8:1) which means “lord” or “master”.  In the Aramaic of Dan 4:24, shalliyt  (which refers to human or divine power or authority) is translated as “sovereign.” And in the New Testament, “sovereign” is used as the translation of the Greek despotes (the root of the English word despot) and dunastes (the root of the English word dynasty).  Each of these titles were commonly used to address leaders and military authorities.  Not all English Bible translations even use the word sovereign, and when they do, it is taken from terms in the original languages that refer to power and authority that can be either human or divine. In no case does the original language denote the idea of absolute control over all things in the universe.

I believe that the sovereignty of God is a term that describes his unlimited power and final authority over all created things. He does not control all things that happen. If that were the case, then there could be no human responsibility for sin, and his punishment of the unrighteous would be random and cruel.  Humans have free will.  We often exercise this free will in destructive ways.  But when we pray and humble ourselves before God, he will intervene in powerful ways to reverse the consequences of our folly.  And that is the “real story” in the book of Esther. She and all the Jews prayed and fasted for three days (Esther 4:16) and God moved in powerful ways to save her people.

The fact that God is sovereign does not mean that we can sit back and just watch him orchestrate all things “for his glory.”  We must diligently pursue his purposes, fervently pray, and courageously take action.  Only then shall his will be done, and his kingdom come.