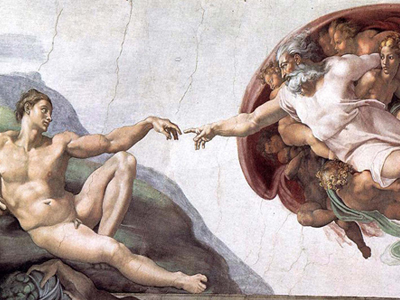 With all of the terrible things happening in the world, it’s easy to be pessimistic about the human race. Some of the church’s greatest theologians are noted for their very negative view of humanity. St. Augustine described us a “whole mass under condemnation” ,“wallowing in misery”, and “tossed from one form of evil to another.” (NPNF 1.3, p 246)  Calvin wrote: “everything in man, the understanding and will, the soul and body, is polluted and engrossed by this evil desire . . . man is of himself nothing else but evil desire.” (Institutes, I.II.1)

The Bible does clearly teach that all of humanity is sinful and falling far short of what God desires for our lives (Rom 3:23).  It is also clear that our sinful condition can be traced back to Adam (Rom 5:12).  But in all of our talk about original sin, we sometimes lose sight of the fact that every single person who is ever born still resembles God.

In Psalm 8:4, David asked the Lord, “What is man that you are mindful of him?”  In other words, “Why do you care about people?”   He then went on to answer his own question in a rather shocking way: “You have made him just a little bit lower than God, and crowned him with glory and honor.” (Ps 8:5)  This verse doesn’t seem to sync well with Augustine’s “condemned mass” of humanity or Calvin’s idea of total depravity. And unfortunately, many English translations of this verse reflect that theological bias.  The King James reads “you have made him a little lower than the angels” and many other translations say “heavenly beings.” It seems they just couldn’t bear the suggestion that people are still created just a tiny bit lower than God. So they rendered the Hebrew elohim as “angels” or “heavenly beings” rather than “God”, which is the most accurate translation of the word. This is a scandalous case of twisting the text to match a doctrinal system.*

Translation matters aside, we need to think about what this passage is saying. People are just a sliver below God. He’s crowned us with glory and honor. He’s made us really, really awesome.  Yes, sin has tainted us and separated us from God.  Yes, we are hopeless apart from Jesus Christ.  But let’s not lose sight of the fact that every single person in this world is made in the image of God. Every single person reflects his beauty, his wisdom, his goodness and his power.  Jesus didn’t die to redeem worthless worms that have no value whatsoever. He gave his life for beautiful, wonderful, amazing human beings who tragically lost their way. God created us to be worthy of Himself. Our worship is meaningful to him because we are, in fact, beautiful creatures.

In the next post, we’ll continue in Ps 8 and consider how our god-likeness shapes our relationship with the Creation.

* Thankfully, there are now a handful of translations that have the courage to translate the Hebrew accurately (ASV, NRSV, HCSB)