Should I be afraid about asking God for the wrong thing? 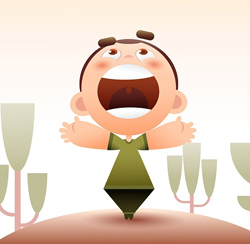 The other day I heard a Bible teacher argue that we should be very cautious about presenting our will, or our desires to God in prayer. She drew from a passage in 1 Samuel 8, where the people of Israel asked Samuel to appoint for them a king. When Samuel consulted with the Lord about the matter, God basically replied “Give them what they ask for, even though I’m not happy about it and it’s not what’s best for them.”   And so, based on this account, this Bible teacher suggested that in our prayers, we really shouldn’t ask God for anything that we want – because it might not be what’s best for us. We should only pray for His will to be done. The little catchphrase was “When we rest in the Father’s sovereignty, we resist fruitless striving.”

I have to admit that this kind of reasoning drives me crazy. “Resting in the Father’s sovereignty” is just another way of saying that we should accept that God’s going to do what God’s going to do, with or without us. “Fruitless striving” is, in this case, praying for something in the naïve understanding that your prayers might actually move God to act. So here’s my suggestion for their promotional keychains:

For those of us who believe that prayer can and does actually change things, what is the right approach? Is there a danger that we might be asking God for something that is bad for us, and that he will give it to us because of our persistence?

First, let’s talk about the passage 1 Samuel 8. The problem wasn’t with the way the people prayed. The problem was with their hearts. They were comparing themselves to other nations who had kings to lead their armies. And rather than trusting in God alone as their leader, they wanted a man to be their king.  So yes, there is always the risk that when your heart is hardened, and you stubbornly insist on fulfilling your own desires, God might allow you to get what you want in the hope that you’ll learn from the experience. But this potential danger is easily addressed, and it should never hinder us from being bold in our prayers.

God invites us to ask him for good things. In Luke 11:10-13 Jesus said, “For everyone who asks receives, and the one who seeks finds, and to the one who knocks it will be opened. What father among you, if his son asks for a fish, will instead of a fish give him a serpent; or if he asks for an egg, will give him a scorpion? If you then, who are evil, know how to give good gifts to your children, how much more will the heavenly Father give the Holy Spirit to those who ask him!" In his teachings, Jesus communicated very little concern about us asking for the wrong things in prayer.  His greater worry was that we would fail to bring our requests to the Father, or that we wouldn't be shamelessly persistent in our prayers.

So ask, ask, and ask. And don’t stop asking! And after you’ve asked, say this: “Father, if in any way I don’t understand what I really want, or if what I’m requesting is something that is not best for you, for me, and for others – then I defer my request to your wisdom.”  There's no danger in being too agressive with your prayers. God can handle it. But there is enormous danger if out of fear, or a misunderstanding of God's character - we don't ask for anything at all.