Is it ever OK to Give Up? 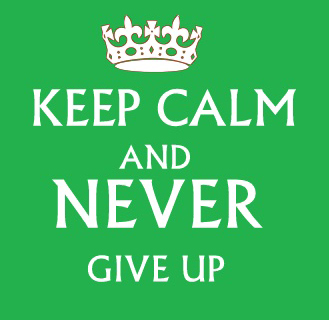 I hate quitting. I hate letting go of a dream. I hate acknowledging that I was wrong. But as I’ve grown in age (and hopefully in wisdom), I’ve come to the realization that sometimes Giving Up is the right thing to do.

I’m wired as a visionary. I have the ability to see things not only as they are, but as they could be. Sometimes I lose track of the “here and now” because I’m looking into the future, dreaming about the possibilities. There are passages in the Bible that encourage this kind of thinking. Hebrews 11: says that “faith is the assurance of things hoped for, the conviction of things not seen.” This chapter goes on to give account great heroes of faith: Abraham, who looked ahead to the city “whose designer and builder is God.” Moses, who endured “as seeing him who is invisible.” Then there are Gideon, Samson and David who conquered kingdoms, obtained promises, stopped the mouth of lions, quenched fires, and who received back their dead by resurrection.

There were men and women who believed in God for the impossible, and because of their great vision and faith, saw the hand of God move in powerful ways. Did any of them ever give up?

Actually, the answer is YES.

In that list of heroes, the name of king David is mentioned. And there is a notable example in the Scriptures where after pleading with God for several days in prayer and fasting, David came to the realization that he wasn’t going to get what he was asking God to do.

David’s wife Bathsheba gave birth to a son. Now we all know that there’s a backstory here, but let’s just start at this point. The child (whose name we don’t know) became very ill, and David was heartbroken. 2 Sam 12 says that David fasted and laid on the ground for several days, begging and pleading with God to heal the child. His friends tried to pick him up, tried to get him to eat something, but he would not be moved. Then the child died. David’s friends became even more worried. “If he acted like this when the baby was ill, what will he do to himself when he learns that the child is dead?” David heard them talking, however, and he asked, “Is the child dead?” And they responded, “The child is dead.”

At that moment, instead of hurting himself, or even crying, David got up, cleaned and anointed himself, changed his clothes, ate a meal, and went the house of the Lord to worship. His friends were baffled. “Why are you acting like this?” they asked. David responded, “While the child was still alive, I fasted and wept, for I said, ‘Who knows whether the Lord will be gracious to me, that the child may live?’  But now he is dead. Why should I fast? Can I bring him back again? I shall go to him, but he will not return to me?” (vs 19)

The most theologically powerful element of David’s response is the phrase “who knows?”. David, in his wisdom, is recognizing that there will always be a degree of uncertainty with regard to the things that we ask God to do for us. David demonstrated incredible desperation and faith. The Old Testament is not full of stories of healing, and yet David believed that God was able to heal that child. And even though Nathan the prophet told David beforehand (the backstory) that the child would die, he still cried out to God on behalf of that little baby. David, the man after God’s own heart, knew that God had a soft spot for him. He knew that God sometimes changes his mind about disasters and calamities he has planned (e.g. Num 14). He figured Why not give it a shot? And it was this kind deep understanding of God’s character that made David such a special man.

But all that said, the time came that David had to give up. He had to recognize that sometimes the rawness of our desperation is not enough to change the outcome, and we have to let go.

So what about Hebrews 11? What about the certainty of things hoped for, and the conviction of things unseen.   To answer that question we need to go a little farther back into the book of Hebrews. In 2:1 it says, “We must pay much closer attention to what we have heard.” And here we realize that with all our faith and all our desperation, we cannot “believe into existence” things that God himself has not spoken. What has God said to us about this life? Has he promised that every sickness will be healed? Has he promised that no harm will come to his followers?   What he’s actually promised us is hardship and sadness: “Truly, truly, I say to you, you will weep and lament, but the world will rejoice. You will be sorrowful, but your sorrow will turn into joy.” (Jn 16:20) Our ultimate confidence is not in the victories and triumphs that we will experience in this present life. To be sure, we will often be defeated. Our ultimate hope is the joy that will be ours when he returns: “In that day you will ask nothing of me. Truly, truly, I say to you, whatever you ask of the Father in my name, he will give it to you.”

I would never discourage anyone from praying for the impossible. Yes, pray for healing, pray for the dead to be raised. But when you pray, do so with an openness to the idea that God might have another plan and another purpose. Who knows what he’s going to do? And when it becomes evident that what you’re asking for is NOT going to be granted, you have my permission and my blessing to give up.